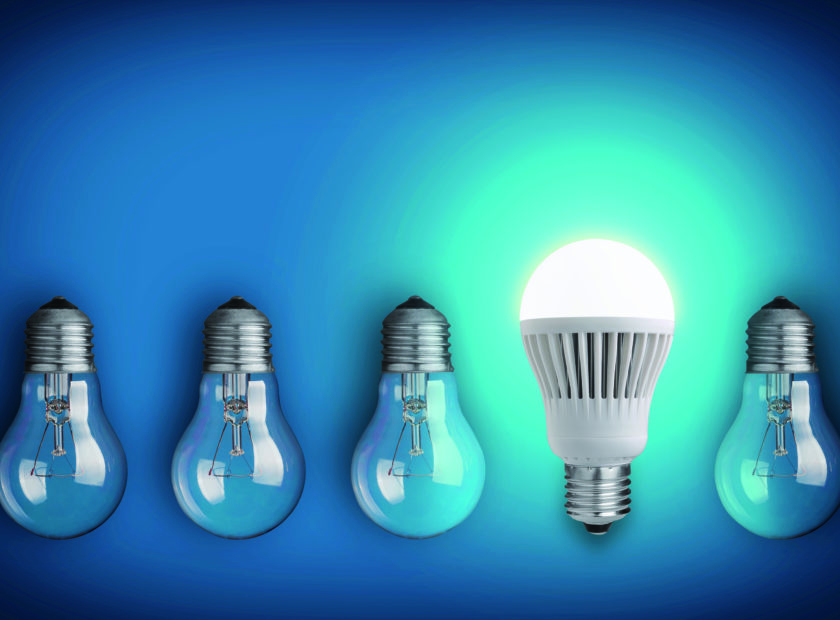 LED’s (Light emitting diodes) are popping up more and more, but there are still a lot of misconceptions around them. Since Greener Kirkcaldy are having an LED amnesty in February (bring in your old incandescent or halogen bulbs and get 10% off LEDs), I have done some research  on LEDs and in this blog I aim to try and bust the misconceptions surrounding them.

One major misconception with LED Lights is that they are not bright enough. The early energy saving lights did have issues with lighting up a room but those days are long gone.

The main reason for this misconception is that we are used to measuring our bulb brightness’s using wattage, so as an LED has a lower wattage this would obviously mean that the light will not be as bright, but this is not true at all. Watts are a measurement of energy use and do not give us the amount of light that will in fact be outputted from the bulb, this measurement gauge worked with incandescent bulbs as the only way to increase the light output was to increase its wattage.

LED’s are more energy efficient than other types of lighting meaning they can actually produce more light per watt of energy, resulting in a low wattage high output bulb.

Misconception Number 2 – LED’s do not last

Misconception Number 3 – LED’s do not save energy

LED’s do save energy. You just have to look at the wattage. A halogen bulb uses 50 watts and an average LED bulb only uses about 5 watts, which means there is a huge saving in the amount of energy that is being used, and if you multiply that with the amount of bulbs you use in your house you can see the reduction of energy being used by using the LED lights instead.

A second factor to take into consideration is the efficiency of the light source, which means you have to look at the amount of light that is being produced by the amount of watts that is being used to produce it. What this means is that a bulb which can produce more light from each watt will save more energy than one that cannot produce as many lumens per watt. LED’s are much more efficient, producing 50 lumens per watt, while halogen bulbs only produce 6 lumens per watt. So not only do LED’s use less energy, but they are much more efficient at turning energy into light.

LED’s not producing any heat is a very popular misconception, but in fact they produce some heat, just not on the levels of the incandescent or fluorescent lights that get very hot. LED’s do not output infrared which is what makes other light sources hot and heats up the air around the bulb and the bulb itself.

Misconception Number 5 – LED’s are too expensive

A big misconception is that LED’s can be very expensive. When it comes to technology, this is a standard practice: wait a few years until the price has come down. While this may have been a smart move with brand new televisions, DVD players, Blu Ray players and game consoles, it will actually cost you more money when it comes to LEDs. LED’s save you money in the long run over traditional bulbs, so you’re actually paying more and more the longer you wait. LEDs are likely to always have a higher upfront cost than traditional bulbs, and the longer you wait the more money you could lose.

If you want to read more about the misconceptions then why don’t have a look at some of the links below.

The Greener Kirkcaldy Lightbulb Amnesty was very popular last year and we are running it again this year. Learn more here. If you would like to know more about LED lights then our blogger Lauren did a couple of pieces last year on the pros and cons of LED lights and lights for an efficient home.

< Volunteers getting hands on in the kitchen | Would you like to create your own green energy? >