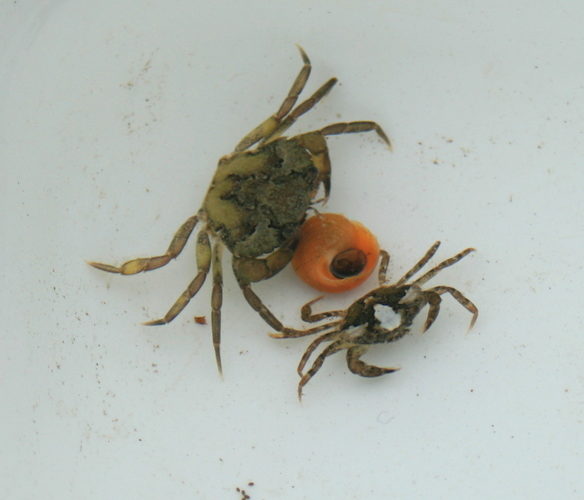 On the 11th of June, the weather forecast would have had us believe that it was going to be a miserable, drizzly day. And I almost decided to stay home under my cosy duvet. Almost. But Greener Kirkcaldy’s Coastal Wildlife Wild Walk’s promise of beach adventures was just too tempting, rain or not. And it did indeed turned out to be a veritable wildlife safari!

We met our guide, Tony Wilson, at the Seafield beach carpark – just a short walk away from the Kirkcaldy town centre. The sky was grey with rain clouds but thankfully all they managed to produce were a couple of drizzly spittles.

Tony started with important advice for any shore-explorer – before you head out don’t just check the weather forecast, but also make sure to have a look at the tide tables for your locality (e.g. Tides4fishing). It is all too easy to get trapped by rising tides – which was amply illustrated by the stranding of a school group on a Kent beach earlier this month.

Health and safety out of the way, we headed down to the sandy shore. The tide was low, exposing the full width of the beach. Tony pointed out the bands of seaweed and other debris that marked several strandlines on the sand – each corresponding to the highest tide-mark as tides cycle between monthly low and high points. We then spread out for a treasure hunt among the dry seaweed, before gathering again to listen to Tony telling us more about our finds.

Inspired by shells we brought him, Tony launched into a dramatic re-enactment of dog whelks preying on limpets, David Attenborough-style. They use acid to soften their prey’s shell and their modified ‘tongue’ to drill a hole into it, before inverting their stomach to digest the limpet’s soft body inside its very own shell. You can watch such an attack – and its prey’s defense – in vivid detail here.

It turned out that the mysterious ‘bubblewrap’ balls we found alongside the shells are the egg sacs of a close but much bigger dog whelk relative, the common whelk.

An unassuming strip of tiny shell fragments and sand grains was another of my favourites among our mystery finds. Tony identified it as a sand mason worm camouflage tube! The worms build the tubes around their bodies by using a ‘snotty’ substance to stick bits of material together. This helps them remain unseen by predators when they poke their heads and bodies out from the sand under water to feed.

Among the seaweed we spotted drifts of black smooth pebbles, their weight lighter than you’d expect from a garden variety rock. We all eagerly volunteered our identification – it was, very obviously, sea coal! Coal lumps are a common find on Fife’s beaches, having been extracted by the waves from the exposed coal seams on the sea cliffs. A few in our group fondly reminisced about the time, not so long ago, when they used to go sea coal gathering to use for fuel at home. It is particularly abundant at Seafield because Kirkcaldy port used to service the coal mining area in Fife, lots of it falling into the water in the process.

As we progressed through the edge of the sand dunes towards the rock pools at the far end of the beach, Tony spotted a couple of distant land cousins to the vicious whelk – a common garden and a banded snail. Apparently they love the dune areas along the shore as they are full of calcium from the shells of the sea creatures, which in turn helps them build their own portable homes. Some of the party were not too impressed with the snotty trails they left on Tony’s hand!

We then moved onto the highlight of the trip – exploring the rocky shore and its pools teaming with life. Armed with plastic sieves we dispersed to clamber over rocks, our eyes fixed down, looking for the slightest movements under the water’s surface.

The intense focus gave way to occasional squeals of excitement (OK – I will admit it was mostly me) as we gathered to examine our catches floating in the plastic specimen trays – musing over the prawns, baby shore crabs, jellyfish and chitons…There was also some discussion about the edibility of the seaweed, with one of the participants collecting a handful to liven up his daily salad.

And to top things off, somebody even found a fossil! Tony thought that it might have been a crinoid – a now extinct sea creature which looked like ‘a starfish on a stick’.

But soon our hour of adventure was up and we reluctantly walked back to the car park, chatting about our discoveries.

If you are looking for an excuse to explore the local beaches and to learn more about our coastal wildlife, you may like to have a look at the ‘Capturing our coast’ project. The project is looking for volunteers to help scientists map coastal biodiversity around the British Isles, and provides training on species identification.

And if you are curious about the world of moths and butterflies, you shouldn’t miss the next Greener Kirkcaldy Wild Walk on Saturday 16th July. Get in touch to book your place.