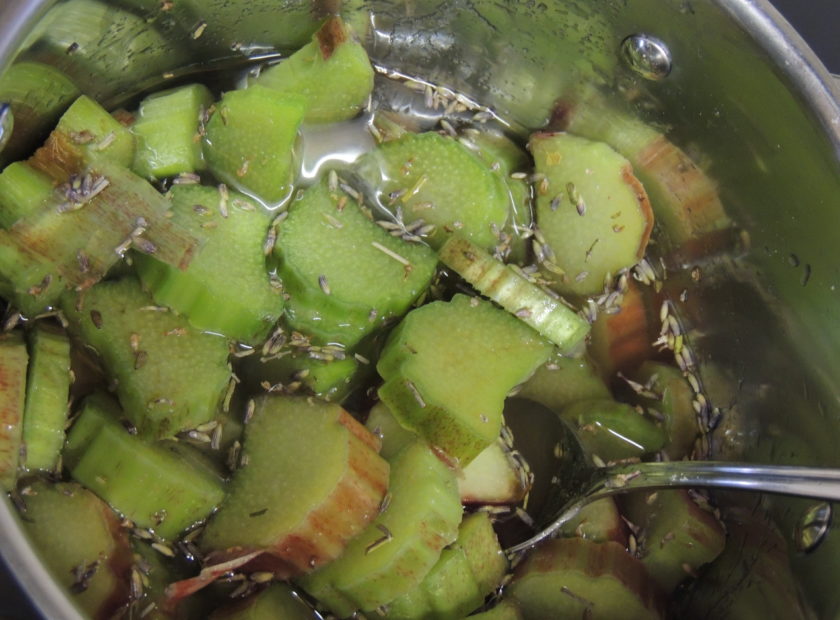 One reason, according to Katrine van Wyk to eat fruit and vegetables that are in season is:

Flavour
Produce that has been allowed to fully ripen in the sun tastes amazing! Freshly picked produce has the optimal flavour – crispy, fragrant, juicy and colourful. Those summer heirloom tomatoes make all other tomatoes seem inferior. You can eat it like an apple; raw, warm from the sun and straight from the vine.

Read all 10 reasons. Find out what is in season right now.
Right now Rhubarb is in season. So here are two (and a half) recipes for what you could do with it. It’s easy to grow in your own garden and fit for a low budget!

Rhubarb Chicken
Most of you will probably use rhubarb for sweet deserts but it also goes very well with chicken or pork!

How to make it:
Preheat the oven to 180oC. Cut the Rhubarb into equal pieces of about 1 cm.

Spread out in a baking tin and cover with olive oil, salt and pepper.

Place the chicken on top, cover with pepper and drizzle with a large amount of honey. ( I made a little more)

Cover with tin foil and cook in the oven for 15 minutes. Then poke 3 holes in the foil (or it will boil over!) Cook for another 20 to 30 minutes until the chicken is nice and brown.

Perfect to serve with rice or have with wraps.

You could replace the chicken with cubes of potato. You would use about 4 big or 8 small potatoes. Best types to use are Lady Balfour, Vivaldi or Desiree.

Rhubarb lavender crumble
A recipe that is known to many but with a twist!

What do you need:

How to make it:
Preheat the oven to 180oC. Cut and wash the rhubarb like in the recipe above. Put in a pot with half of the sugar.

Cook until the rhubarb has reached the preferred density. I prefer mine soft, but get it out sooner if you prefer the chunks to remain more solid.

While it boils you can make the crumble. Mix all the ingredients in a bowl with your hands until it becomes a well mixed crumbly mixture.

Drain the rhubarb but save the water you cooked it in!
Spread the drained rhubarb over a baking tin cover with the crumble mixture.

Cook in the oven for about 15 to 20 minutes until the top is golden brown.

Syrup
Now about the rest of the sugar… I do not like to waste anything so this is what you can do with the pot of water/vinegar that is left over after draining your rhubarb earlier.

Add the other half of the sugar to the water and boil until it becomes a syrupy mixture.

Let it cool down a bit and store in a bottle or tub.

It is perfect syrup for ice cream, in tea or coffee for added flavour (instead of sugar), on your pancakes or anything you like! It keeps for about 3 months at room temperature.

Note: If you’re not lucky enough to have a garden to grow your own, you can buy all the ingredients mentioned ethically and locally through our Fife Food for Fife Food project or from our Eco Shop (chicken excluded)