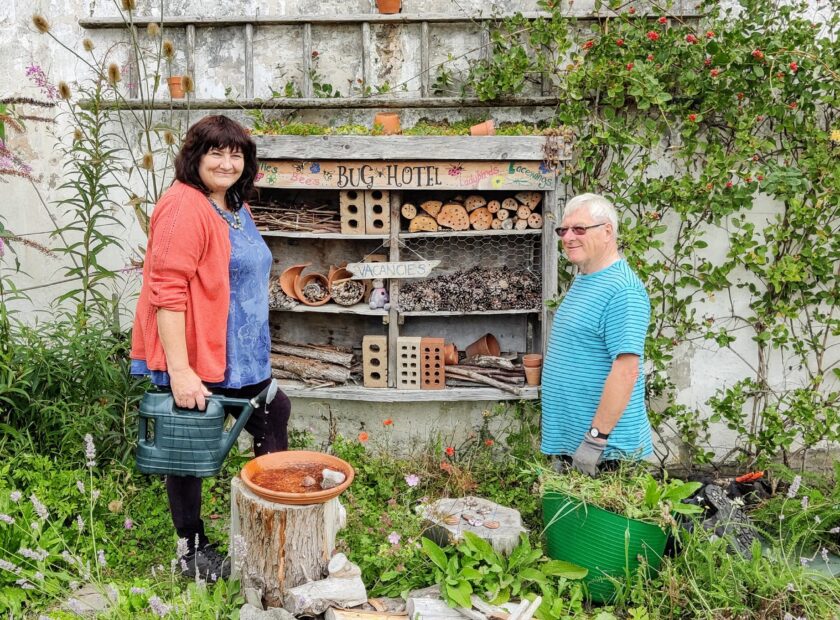 Posted on 9 December 2021 by geraldine

Carol and Cap continue their series on why people come to the Walled Garden and what they find.  Here is Alice’s story . . .

WANTING ONE RESULT but getting another is common enough, but for volunteer Alice Brotchie and husband Roy Munton it all ended well – both for them and the Walled Garden.

Retiring from Lincolnshire to Alice’s native Fife they applied for an allotment after settling in Dysart.  “We had to wait and while waiting we came to the Walled Garden,” says Alice. “We thought we would just come until we got an allotment, but we enjoyed it so much that we just kept on coming,” she added.

That ‘wait’ (they still don’t have an allotment) turned into a happy and fulfilling three years creating a pollinating border while becoming hotel managers at the same time! Their hotel is always busy but does have vacancies – strictly for bees and other pollinators only however.

“There was nothing there when we first saw the area and we thought, that has our name on it,” says Alice.  “It’s what we enjoy doing, creating thing”.

“We developed the border over three years but it’s still developing. It never comes to an end,” she laughs. “It’s a lot of maintenance for the natural look,” she adds.

They have their eyes on . . . yes, another border.  “There’s a long border at the top.  We’ll never be out of work, there’s always something to do,” says Alice. Adding: “We’ve learned so much about the different kinds of bees and how to plant for pollinators.”

But as well as the pollinating community – including bees, hoverflies, lacewings, wasps and moths – there is a human community as well. It is, as Alice describes it, “a community of friends with a common goal.  And you can come or not, it’s a relaxed commitment.”

For her and Roy, who also works on the vegetable plots, there is one result from their volunteering at the Walled Garden which underpins everything else. “We feel a sense of achievement and pride in what we’ve done. It’s important for people to feel good about themselves,” she says with emphasis.