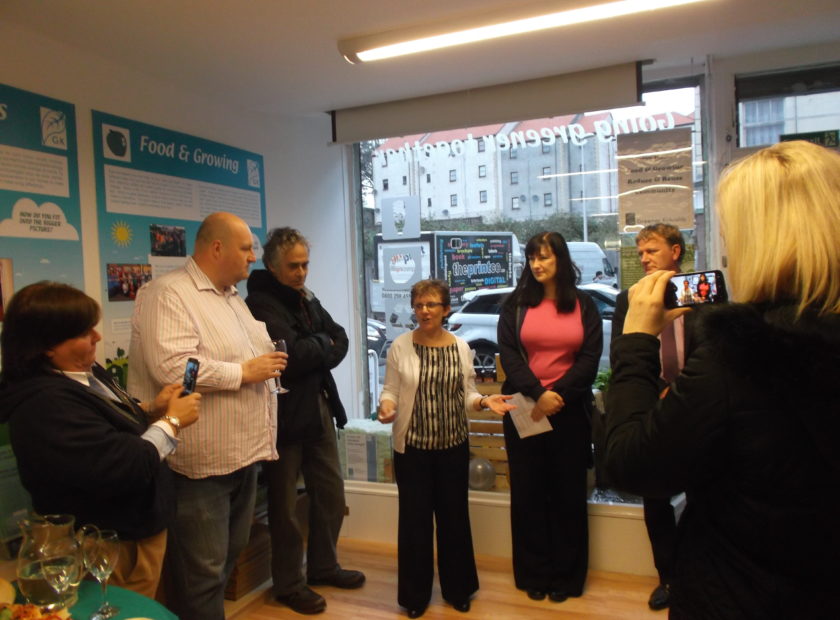 As of October the 10th the old Greener Kirkcaldy has transformed into a colourful and eye-catching new hub. What a transformation it is.

I missed the opening night, but I would have loved to have been there . I heard nothing but good things about how it went. There was a large turn out and the place was packed with supporters of the Greener Kirkcaldy charity, and others who were curious about it. The interest didn’t stop there.

The next day I decided to visit the new hub to see the massive transformation. It was amazing. The space was a lot brighter, it was set out in a very smart and eye-catching way, I especially liked the colourful display boards that didn’t give you too much information and the information was given in a fun illustrated way. The new look and layout of the hub certainly worked. I was there for a few hours and there was always at least one customer in at any given time.

There were two men extremely interested in the charity and what it had to offer, one of the guys had bought many items(after borrowing money off the other) and everyone was engaged in a large conversation about what he could make with these said goods. Hummus was a main talking point and I even learned a thing or two about how hummus is made. Back to the point, the other guy was more interested in the youth side of things as he works in the Kirkcaldy YMCA. Hopefully this will attract some more young people into the organisation. On the other hand there was a young boy who came in as he was doing a self set project about fracking, the shop staff were unable to give him specific information but did give him ideas for where he could find out information and different aspects of fracking he could look at. Another woman came in to ask about changing energy company because of their association with fracking. This is just some of the people who came into the hub, we now have many new members.

The hub is now a spacious, bright and even more friendly environment now and with new independent coffee and food shop, The Painted Teapot, opening just across the road our end of the high street might become alot busier and hopefully Kirkcaldy as a whole will now get closer to being a green town.

< Farewell to the carrier bag… | Autumn – The most beautiful season >