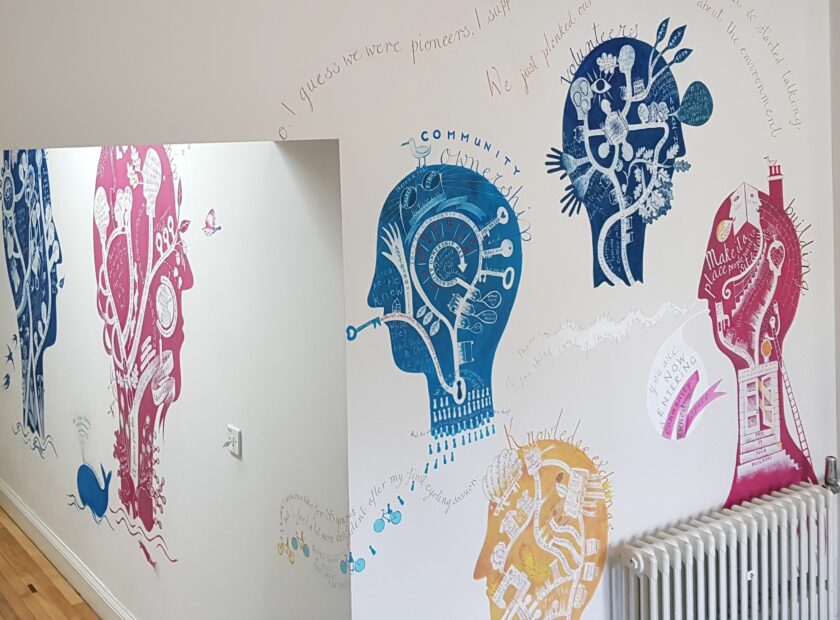 In Autumn 2020, we embarked on a new project with Community Land Scotland and The Stove Network – Urban Journeys. This aimed to dig down into individual stories of ownership for urban landowners, their communities and for others who are inspired to learn more about the impact community ownership can have for our local places.

We purchased our community building with funding from the Scottish Land Fund in 2017 and refurbished it with the help of a grant from the Big Lottery Fund’s Community Assets programme. We opened the building, which houses our new Lang Spoon Community Kitchens, as well as our office and an events space, to the public in April 2019.

“We had always thought of community land ownership as something that happened in other places, the islands or highland estates. When one of our volunteer board members first suggested that WE could buy land it felt radical, daunting and exciting. That was in 2013…we took ownership of our town centre property in February 2017. It has been a rollercoaster ride of learning, partnership development and the gradual realisation that we could actually do this.”

Last year, as part of Urban Journeys, we commissioned two local artists – Hazel Terry and Catherine Lindow to work with our community to create a mural for our Welcome Area, celebrating the community ownership of our building and telling the story of Greener Kirkcaldy and how our community has led our work over the last 10 years.

Below, Hazel and Catherine describe the process of making the mural:

We interviewed over forty people connected with Greener Kirkcaldy. We wanted to find out how the building and its functions affected the work of staff, volunteers and the public – about how they perceived community ownership and how the day-to-day work of the organisation dovetailed with its vision. We started by visiting the Lang Toun Larder Pantry and Ravenscraig Walled Garden to visit volunteers at work, and enjoyed some great chats. This gave us a good sense of some of the work in action before the lockdown started in December.

After that, of course, all of our conversations had to take place over Zoom. We found staff, volunteers, Greener Kirkcaldy members and participants were all very willing to talk about their experiences, and everyone had a lot to say! It was going to be hard to choose which quotes to use in the mural… We tried to note down what our interviewees said word-for-word. It was important to us that the real voices of people would be part of the final piece. 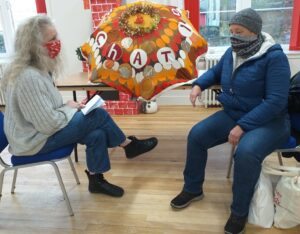 Our initial idea was to make a picture that looked something between a tree and a map, with interconnected routes and arteries. But as we interviewed people, the things they said really took a hold on our imaginations and we started to feel that the real force that drives Greener Kirkcaldy is the people. So we decided on head outlines as a framing device. There are six, and each has a different theme. The building, the volunteers, knowledge exchange, community ownership, stewardship and community.

We loved the idea from one of our interviewees, a staff member, who said “If we can’t grow a living wall, we’ll paint a living wall!” We hope that the voices in the mural show the living voices we found at Greener Kirkcaldy, in and around this building that the community is so proud to own.

You can view the mural by visiting our building at 8 East Fergus Place or view a digital version on Genially.

Through the Urban Journeys in Community Landownership project, Community Land Scotland wanted to dig down into the individual stories of ownership of the participating urban landowners for themselves and also for their communities and for others who are curious to learn more about the impact community ownership can have for our local places. They felt artists were best placed to lead on this process of reflection and community engagement. As a kind of ‘outsider voice’ they were able to bring a different lens to this. The arts also played an important role in communicating the emerging messages. Community Land Scotland worked closely with the Stove Network on designing and managing the Urban Journeys commissions.