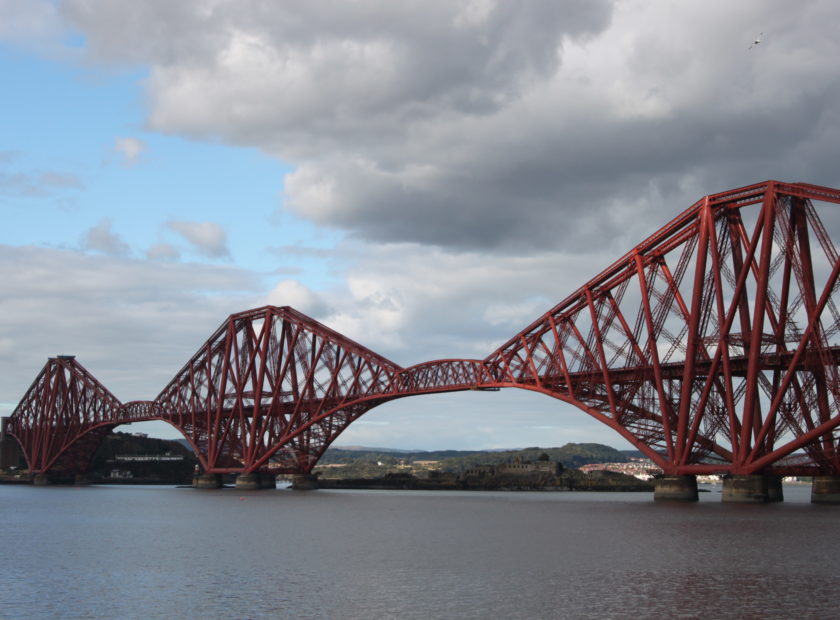 Since I started working in Riccarton I have driven to work from my home in Kirkcaldy. High ticket prices and the thought of having to get a bus and a train and walk have always put me off using public transport. But in the back of my mind, thoughts of the environment mean I always feel guilty taking the car. So for Car Free Day (September 22nd) I decided to ditch the car and try a new way of getting to work, and I was pleasantly surprised with how much better this was.

Firstly, I took a leisurely 15-minute stroll from my house to the train station. I found that this was much more effective in waking me up than grabbing a coffee and driving, and it also gave me the chance to take in some of Kirkcaldy’s sights such as the Adam Smith Theatre and Kirkcaldy galleries and garden.

Next, I caught the train to Haymarket. This 45 minute journey took the same amount of time that it usually takes me to drive, but was a much nicer journey. Firstly, the views along the coast and the Forth Rail Bridge are unbeatable (and much easier to enjoy when you’re not concentrating on the road). Not having to concentrate on anything else also meant that I could sit back, listen to my music, and read a book – all things I never have time to do at home. I suppose I could have used my extra free time to get some work done, but I very much enjoyed having some time to myself!

Finally, I caught a bus from Haymarket, did some people watching and spent most of the journey watching Edinburgh pass by – much more interesting to look at than the bypass and the motorway. I jumped off early for an extra walk, but the bus would have taken me pretty much up to my office door and I didn’t have to spend ages looking round for a parking space. My journey back was equally nice. I especially didn’t miss sitting in rush hour traffic waiting to cross the Forth Road Bridge and I even managed to shut my eyes and get 40 winks (the only problem there was making sure I woke up and got home!)

Using public transport to get to work took me slightly longer and cost me a few pounds more than driving but it was a much more enjoyable experience. I had never realised how stressful driving actually is and how tense it makes me feel – they say that driving during rush hour can be as stressful as skydiving! I felt much more alert, happy and refreshed for work and it was nice to get home and not have headache from constantly stopping and starting in traffic. The short walks at the start and end of my journeys also gave me some exercise when I had been sitting at my desk all day. I’m now thinking that if I got myself a bike and bypassed the bus altogether it would only take me half the time, would be much cheaper and would help me keep fit!

For those of you that drive for most of your journeys, why not ditch the car one day and try an alternative mode of transport – you might be surprised by how much happier it makes you, I was!

< Apple Day 2014 | Fuel efficient driver training – could you be the greenest driver in Kirkcaldy? >