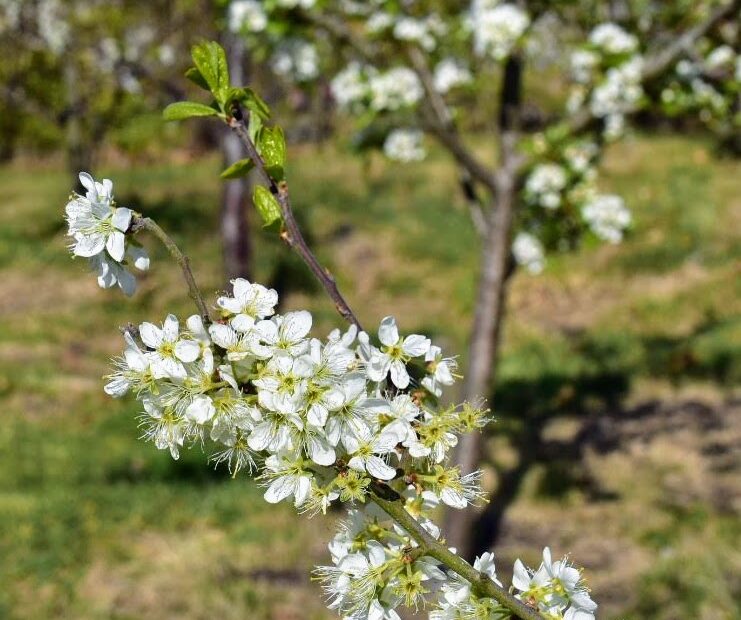 Our Sessional Worker Jackie talks about what goes on in April at Ravenscraig Walled Garden in her latest blog.

We’ve had some lovely warm days at the start of April with plenty of sun. It’s been very dry though, and unusually for this time of year, we’ve had to water our raised beds and pots to stop them from drying out. Onions, garlic, and broad beans continue to grow, and we also have some cabbage seedlings that Roy grew from seed coming on nicely under a mesh cover.

Ross recently moved the blueberry bushes up to the large soft fruit bed in the orchard and has watered them regularly to ensure that they establish well in their new home.

The wildlife border is showing signs of life with visiting insects and birds. This will ensure we have a good number of pollinators on the plot and we’ll encourage them further with companion plants such as calendula and cornflowers in amongst the veg.

It’s my favourite time of year in the orchard as the blossom starts to open on the fruit trees. The plum trees are usually first to bloom, followed by the pears and cherries, with the apples joining in towards the end of the month. 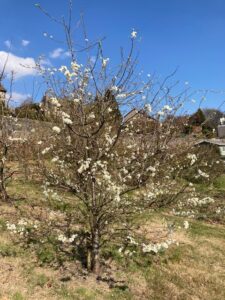 Seeds are sprouting in the polytunnel and we’ve now sown courgettes and pumpkins, along with plenty of herbs. The tomato and chilli seedlings are coming along but need watered regularly to keep them healthy. Carol sowed carrots outdoors in one of the raised beds last week and we’re aiming for a good crop of these this year. 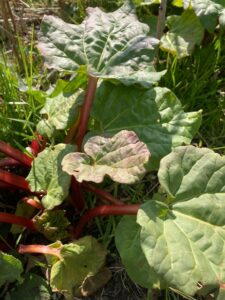 April harvests are still a bit limited, but the rhubarb is now growing well and the first crumbles have been eaten. Try this recipe for rhubarb crumble from our Community Chef Iain. Sprouting broccoli is in full production so we’re making the most of this short season, and there are plenty of wild greens around including sorrel, wild garlic, garlic mustard and young nettles. All of these are delicious wilted down in a little olive oil and served with pasta or rice. I saw the first asparagus spears appearing at the weekend and this month’s recipe is in anticipation of the start of the asparagus season. British grown asparagus is usually available in supermarkets and greengrocers from the end of April until June. It’s a versatile vegetable and can be used in risotto, pasta dishes, quiches, omelettes and many more. A simple way to cook it is to oven roast it and then serve as a side dish or starter. You can do a bundle of asparagus this way (or if you grow it at home you may only have a few spears at a time).

Trim the harder, woody ends from the asparagus spears.

Line a baking tray with foil and then lay the spears in the tray.

Drizzle with olive oil and season with salt and pepper.

Add a sprinkle of chilli or a crushed garlic clove if you prefer.

Roast for 10 minutes until the asparagus is soft and the ends are a little crispy.

You can squeeze the juice of half a lemon over the spears at this point or add a sprinkle of parmesan.

< News from Cosy Kingdom | Working towards a Low-Car Kirkcaldy >