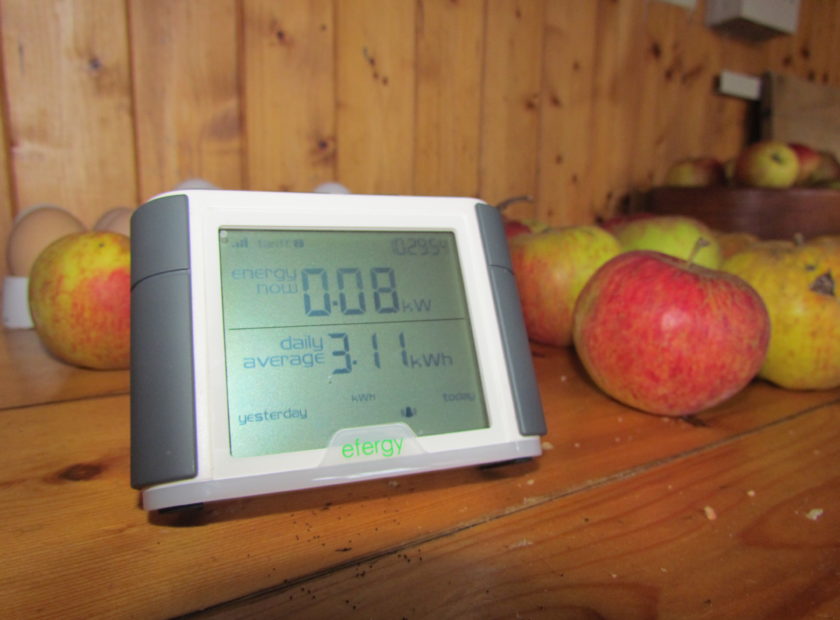 Posted on 2 October 2014 by Jennifer Bain

I have a confession to make: I have, of late, been wasting electricity, switching things on and off without necessarily using them. What?! Have you gone mad?! No, no, I am quite sane, at least by my usual standards. It is for the greater good, you see – It is all in the name of research! (No animals were harmed in the process.)

I have been loaned a nifty little energy monitor to help me identify ways of saving energy – to see what the biggest energy guzzlers in my house are, and which seemingly benign electrical goods can quietly sap energy away without you even noticing. Below I have made a rough estimate of the Kilowatts of some of the appliances in my house, based on the energy monitor readings. (See end of blog.) Some appliances use a steady flow of energy but for those with a fluctuating wattage I have guessed an average approximation within the range picked up by the monitor. This is therefore only a rough guide to give me some idea of the electrical power of these products, bearing in mind that different makes and models will vary in power and energy usage.

A few things you need to know about power and energy:

With the help of the energy monitor, I’ve managed to figure out a few ways in which I could save electricity and money:

Want to try one out? The energy monitor also records daily and monthly energy use and displays a daily average so you can compare energy use and cost over time and see how you’re progressing. Pop in to the Greener Kirkcaldy Hub to find out about borrowing an efergy energy monitor.

< Fuel efficient driver training – could you be the greenest driver in Kirkcaldy? | Halloween and Bonfire Night Recipes >