Wassailing at the orchard 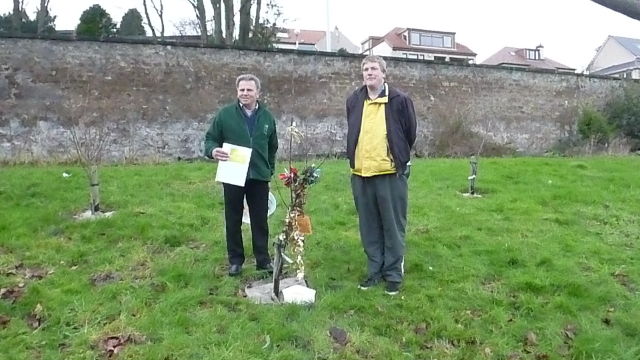 Posted on 8 February 2016 by Lauren Parry

Saturday 23rd January was the date of this year’s apple wassail. This is only the second time that Greener Kirkcaldy has decided to run the event. An ‘Apple Wassail’ is a chance to celebrate the apple tree and how better to do so than by singing to the local apple varieties in Ravenscraig Orchard.

As people gathered in the training area of Ravenscraig Walled Gardens, Mrs Mash told the story of “The Apple-Tree Man”. The story was about two brothers who inherited a farm from their father, but the youngest took most of the land and gave his older brother only a small garden with an apple tree. The older brother works hard and looks after his ox and his donkey and soon his garden flourishes. When the younger sees how well the older brother’s garden is growing he asks for him to pay his rent, but the older brother doesn’t have any money to pay him. The Apple-Tree man tells him to dig beneath the roots and so he digs and digs, careful not to disturb the roots and he finds a chest, overflowing with shiny gold coins. The older brother is able to buy the farm for himself. After the story, chocolate coins were passed around by the Wassail Queen, Volunteer Gill.

After this story, Gill and I were appointed the Wassail King and Queen and it was our job to help lead the procession through the orchard behind Mrs Mash. The group made noise and sung as they walked through the orchard with whistles, pots and pans. The trees were decorated and we sang to 4 of our special, local varieties. Volunteer Gary read  a special poem to the Galloway Pippin.

“Oh apple apple tree, we have come to wassail thee
Wilst thou bear some fruit for me, when the season changes”

The Wassail King and Queen hung toast on the trees and home grown apple juice was sprinkled onto the roots of the trees by the group with pine branches. After the walk through the orchard, mulled cider and hot cordial as well as apple cake were enjoyed by all.

< Learn to Drive Smarter | Changes to our constitution >