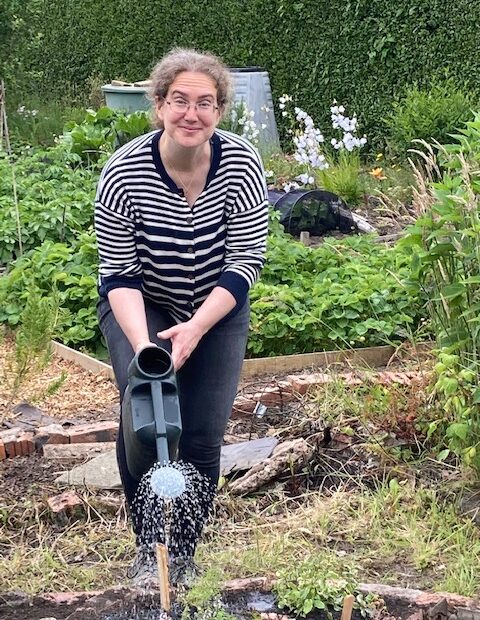 A GARDENEER, SCIENTIST AND POET have all recently found their way to the Walled Garden and they all seem happy.  ‘All’ are in fact combined in one person, volunteer Genevieve Riopel from Quebec, Canada via Edinburgh and now Kirkcaldy.

The about-to-be published poet is writing her MSc. Thesis on sea sponges of 445 million years ago while at the same time continuing her life-long gardening interest.  “I was taught by my mother and grandmother – the vey best teachers!,” she says.

Gardening has been part of her life since those early child-hood days in French Canada, and she tries to garden everywhere she goes.  Going everywhere was literally part of her childhood as her family moved about because of her father’s job as an engineer.

All that moving brought some valuable life lessons with it. “I learned quite quickly about different points of view and how to respond to them,” she says.  The playground can be a swift teacher.

But sponges – why sponges?  They have a tale to tell apparently. They disappeared when the glaciers retreated.  “I’m trying to under-stand what change could have triggered their disappearance.  If we can understand the mechanism, then we understand what’s happening today,” Genevieve says.

Her thesis must be finished in December but before that comes her book entitled ‘Under Wings of the Wind’ which will be published in Belgium.  It is a combination of prose and poetry which perplexed French Canadian publishers who had no category for such a mix, but a Belgian publisher said it “went straight to the heart.” It is, as she describes it, as though the reader is walking on apathway of her life’s experience.  This includes her time as a student nurse in Ottawa and nursing in a shanty town in Peru, covering life and death but “in a gentle way,” she insists.

And if all that weren’t enough the book also has drawings which she did and photos she took.  A life’s experience indeed! Now the wheel of her life has turned again bringing her to Kirkcaldy.  She left Edinburgh for the calm of a smaller town to write her thesis, admitting “I’m not a big city person.” But Kirkcaldy itself had its charms and they weren’t to be resisted.  “I was seduced by the beach, the coastal path and the Walled Garden.”

She will remain until at least December.  Then she must choose between more science or a job.  There is also the small matter of “where I’m going.  I’m asking myself these questions right now. I have some big thinking to do,” says this writer, scientist, artist, photographer – and gardener.  That’s a lot of thinking.