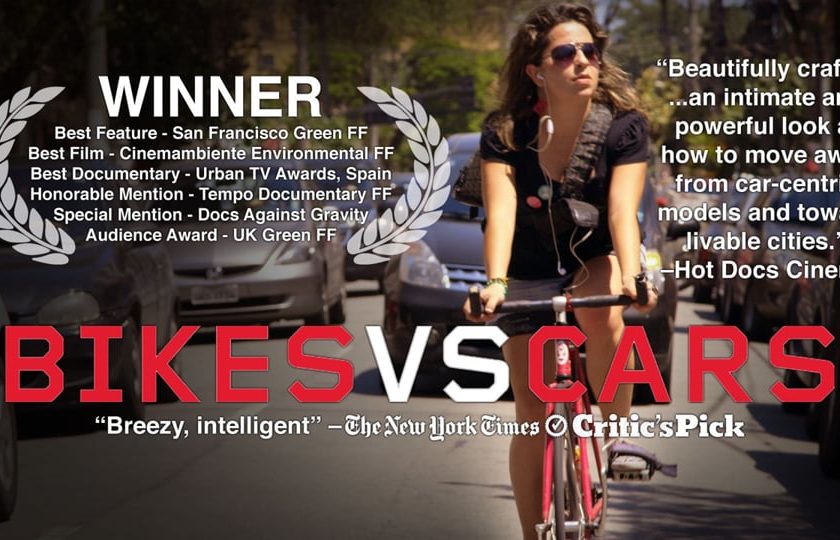 There’s a news report halfway through Bikes vs Cars describing a grisly cyclist injury caused by a car collision.

It’s not a tear-jerking emotional rollercoaster with twinkling pianos and sweeping strings in the background. No-one dies.

Still, it’s a tragic incident. One of the main voices in the film, Aline Cavalcante, watches the report intently on the laptop – not with an obvious look of horror, but with a numbing sense, this feels like a typical day for a cyclist (although when you read the news report, the story is unusual, to say the least).

Cyclist deaths meanwhile are certainly not one-offs, as this film explores.

Bikes vs Cars, by Swedish director Fredrik Gertten, is a title which implies a tick box of pros and cons. In this film though, the pro list for cars is a little empty.

We follow various voices throughout the film, such as cyclists like Cavalcante in São Paulo, to urban planners and people who work in the car industry.

In less than 90 mins, the documentary lays out an astonishing list of facts and figures (you can read them on the film’s website) which should cause for alarm. Commuters spend on average 3 hours a day in traffic, 1 cyclist is killed every week in São Paulo…the list goes on.

Bikes vs the World

But like what is happening with the coronavirus pandemic across certain parts of the world, human behaviour gets in the way. Big corporates and investors see the dollar signs rather than explore the long-term impacts of cars on the world.

Although it rightly touches on the environmental implications, Bike vs Cars is not afraid to explore other murky paths such as class and capitalism.

The late former Toronto mayor Rob Ford is not a fan of bikes, and is one of the main agitators in the  ‘war on cyclists’.

A taxi driver in Copenhagen – one of the cycling capitals of the world – is quite provocative about the city’s friendly attitude towards bikes: “there’s a saying in Denmark that if you give Satan a finger he’ll take your own hand – they gave [the cyclists] a finger.”

Here, the film attempts to explore the negative impact on people’s daily lives on places where cyclists have more respect. But really the film is overwhelmingly negative towards the car industry and its ubiquitous presence in society.

The environment, mental health and people’s lives are at risk because of over-reliance on cars, and while bikes may not be the sole solution, it’s certainly a step (or ride) in the right direction.

It’s a sobering film with some interesting facts, but Bikes vs Cars would only feel like a glorified bullet-point list without the human-interest element.

You feel why these cyclists want to ride a bike, and it’s touching in the way they mourn others killed by motorists (the idea of ‘ghost bikes’ mentioned in the film is melancholic but beautiful).

As the film approaches its final minutes, you do get the sense that there’s something poetic and magical in cycling – you won’t get that sitting in rush-hour traffic.

This film may not put you on a bike after watching it, but it may make you feel warmer to riding one.

Bikes vs Cars is available to rent or buy on Vimeo On Demand.

One of the positives of lockdown is the way people have come together online to discuss films and TV. You can get social media watchalongs with film directors giving running commentary on their works, while those of a musical persuasion have been able to listen to records along with other fans on social media.

May’s Monthly Climate Café was a debate on Bikes vs Cars, and while the Greener Kirkcaldy offices are closed currently due to the lockdown, what better way to keep the event going with a video chat watchalong?

The overall verdict was that Bikes vs Cars was enjoyable and bought up a lot of interesting facts no-one knew before.  We discussed afterwards how we can encourage more cycling.

The topic of safety came up – as the film explores, there’s certainly an element of risk involved. There’s also the sense that cycling is still a somewhat novel form of transport (although during lockdown there’s been an increase in sales and overall use).

In terms of encouraging a wider percentage of the public to switch from car to bike is not a simple task, as there are so many variables to consider.

However, with films like Bikes vs Cars, plus the added bonus of discussing it with others, the monthly climate cafe is a great platform to keep the debate going.

While it’d be good to have the event in person, the chance to keep the conversation flowing from home is a welcome one.