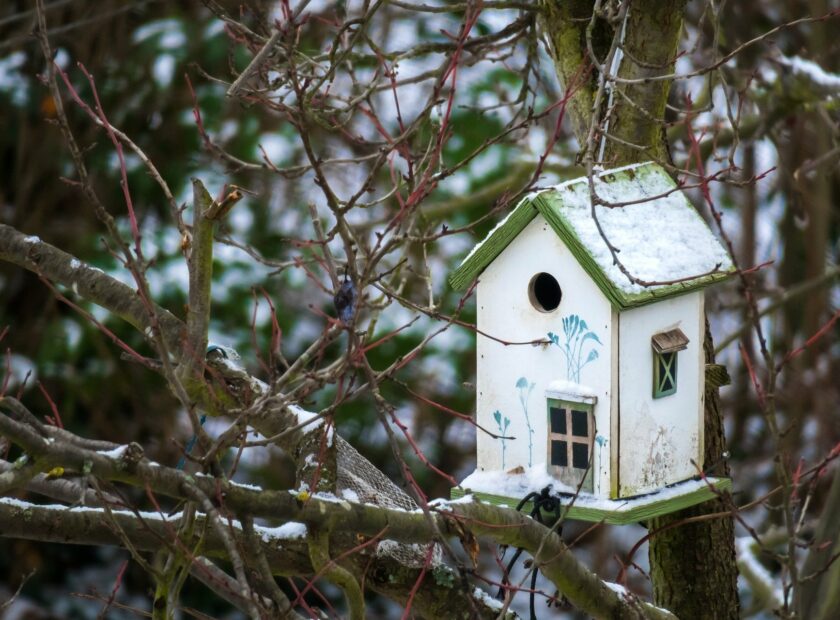 Posted on 8 December 2020 by geraldine

In our last Volunteers Newsletter of 2020, Cap once again fascinates us with his observations on nature:

Location, location and again location can be a survival ticket for many

in desperation when there’s nothing else.

years; so it was in with a new bird feeder next to a hedge, albeit a bit

It was not long, a few hours in fact, and they came.  Everybody jostling

I hope for more – what about a Nuthatch or a Goldcrest or a real treasure, a Great Spotted Woodpecker.  It’s all here for all comers.

area comparable to a small volume, thus losing heat quickly.  They must

eat a lot to keep themselves warm and survive the next 24 hours.

That prime location can come with dangers however.  A female Sparrowhawk came looking for a meal, but she was quickly pursued

by crows.   Shaking them off she nonchalantly perched on an arcade in the

garden next door. The crows returned but with a little twist of her tail she was

Then it was back to business; eat, eat and eat.  It’s going to be a long,

The sycamores chose the wrong location however, all dozens and

dozens if not hundreds of them.  It seemed a legion had marched in to set

up camp around the base of the plum tree, going at least eight feet in one

direction and six feet in another.  It was a crowded canopy no more than

a foot off the ground.

It was easy I thought, you just whip them off.  And it was easy, you

just gave them a pull and up came some tiny roots plus leaves.  But left

behind was a tough, tenacious, never-give-up tap root.  All the tugging

in the world might bring up some of it, but the rest would sprout again

small fork and trowel.  Muscle power would win the day which it did, but

only just.  Sycamores are a fine tree standing alone  but not a legion –

in the wrong location.

For marine animals the prized location can be a bit crowded, but that’s ok.

Castle and the juvenile seals (all eight of them) had the bottom row.

They shuggled and jostled, heaved about a bit, shifted this way and that

and settled to their business.  The spotted juveniles went to sleep while

the cormorants with unconcerned boredom stretched their wings to dry.

space and used it well and without combat. Is there a lesson for us

somewhere on that rock?