To celebrate the Kirkcaldy Walking Festival 2020, Christine May, Chair of Greener Kirkcaldy Board, shares her favourite walk with us. If you would like to share your experience of walking during the pandemic period, why not come along to our Strolling Through Lockdown  event on Sunday 9th August at 7pm?

A year ago, I would have chosen Kirkcaldy Prom as my favourite walk. The changing patterns of light on water, the sense of space at low tide, looking up the pends and wynds to the High St recalling the great names who built both our town and places further afield, and the peace of the harbour are always a pleasure.
But as lockdown kept most of us closer to home for the last four months, I have watched as my local park at Rabbit Braes and Raith Plantation has marched through the seasons alongside my feet and the paws of the rescue greyhound. The whole circuit is between two and three miles, even at its longest, but what contrasts there are for all the senses. Starting each time at the point opposite Ben Alder Place on Bennochy Road, as the soggy end of March gave way to the prolonged dry spell of April and May, the daily permitted exercise saw the slow change of the seasons on the slope down to the valley floor at Linton Lane, the biting late March wind off the Forth tugging woolly hats and setting the early flowering plants dancing, later walks spent admiring the pink waves as the wind blew across the ripening velvet grass and helped lift the fledgling starlings as they practiced their first foraging flights. 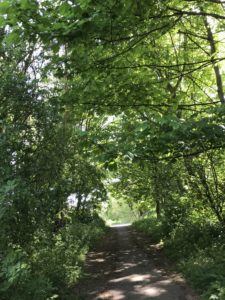 Tree canopy at Rabbit BraesAlong the valley floor it is always more sheltered, and the high trees are well favoured by chiffchaffs, greater spotted woodpeckers, crows and magpies. Wild garlic  and buttercups, hawthorn and meadowsweet, rosebay willowherb and thistles all provide shelter and sustenance for bees, beetles, flies and a host of creatures that I have no names for.  The gorse flowers were a haven for bees in April, as were the nettles when they flowered in pinks and whites. Lately, I have stopped and watched as mink coloured Ringlet butterflies flit amongst the grasses and tried but failed to capture a photo of the scarlet underwings of the day-flying Burnett moth.

Moving along the valley towards Broom Road, the shelter of the trees along the burn gives way to the open area where regular groups of dog walkers gather to have a socially distanced chat while their pets run round them. As lockdown has eased, families have come for picnics, and fearless youngsters have slid down the steep banks to the detriment of the seats of their pants.

And then across Bennochy Road into Raith Plantation, with its choice of two paths. The upper route runs parallel to the houses on Bennochy, whilst the wider lower path follows the burn along Oriel Road. The trees here are huge, growing on the steep sided cliff and along either side of the bottom path. In March and April,  the spring light through the bare trees allowed a huge profusion of flowering plants to provide early food for many creatures. As the greening of the canopy concealed the buzzards wheeling above, only their calls revealed their presence as they taught last year’s chicks to hunt with the woodpeckers drumming an accompaniment. The darker, cooler walks along the lower path on the very hot days in June were soothing as the second mile began. Until, of course, it was time for the lung-bursting scramble up the gulley to the top path to come out behind the houses on Sauchenbush Road.