Growing your own food – a first hand experience 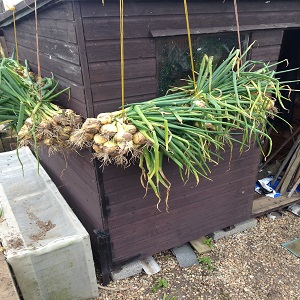 It is about that time of year when the temperature is about to drop and the nights are drawing in so that means it’s also time to dig up all those fruit and vegetables you planted in the spring time to see hopefully the positive results.  With this blog I hope to give the people who couldn’t make it to our Grow Your Own sessions a little bit more information on what needs to be done with your fruit and vegetables around this time of year and some personal experiences.

When I visited my father’s allotment the other day it was a cold damp day which we seemed to have a lot of this year. When talking with my father, the main gripe he had was the famous Scottish weather. It has been a poor year in terms of the weather and that can make it even more difficult than normal to grow your own fruit and vegetables. Despite the weather he has been able to get some decent results from what he did grow. The fruit and vegetables he grew over the summer in his allotment were Onions, Potatoes, Carrots, Beetroot, Peas, Turnips, Cabbage, Parsnips and Leaks. Also in his Greenhouse he grew tomatoes.

First off I will begin with the Onions. After digging them out of the ground my father hangs the onions up on the shed allowing them to dry for about a week. You can see a couple of images below. If there is rain in the forecast for that week then it might be a good idea to hang the onions up in your greenhouse or shed. After they have dried out then put them inside the shed or any other cool place to store over the winter months.

With the Potatoes it’s a hard job digging them out all out of the ground but once you have achieved that then store them in a bag. When you are ready, wash the dirt off the potatoes with fresh clean water, then leave the potatoes out to dry off. After they have dried off then it’s just a case of storing them in a dry cool place over the winter. Here are a couple of images of my father’s potatoes just after he had dug them out the ground and washed them.

My father’s experience with growing Peas this year wasn’t a positive one. He found that he needed to reseed the peas as they weren’t coming up when he expected them to due to the poor weather. Not enough sun can do this. Similarly, he is still waiting on his carrots and beetroot coming through fully. He thinks they are two to three weeks away from being lifted due to not being exposed to the sunlight enough. The joys of growing your own food in Scotland!!

On the other hand, my father’s tomato plants have been a very big success this year. He seeded the plant in plant pots with some soil earlier in the year and now they have come up and he has gotten a lot of tomatoes out of them.  He stored the plants in his greenhouse and made sure he watered them every day and also once a week he gave the plant sheep manure which was mixed in with water to feed the plant and help make the tomatoes grow.

Other items he grows in his allotment are leaks and turnips. There is a bit of a difference between these two and the rest of the items you grow. The leaks and turnips don’t need to be dug up straight away, they can stay in the ground going into the winter months especially if it gets cold as they do like a bit of frost to help their development.

One useful tip I saw while at my father’s allotment was to install a gutter to your shed with a bucket at the end of it. This is useful because you can gain extra water over the summer months if there is not a great deal of rainfall. That extra bit of water you gain can make a big difference.