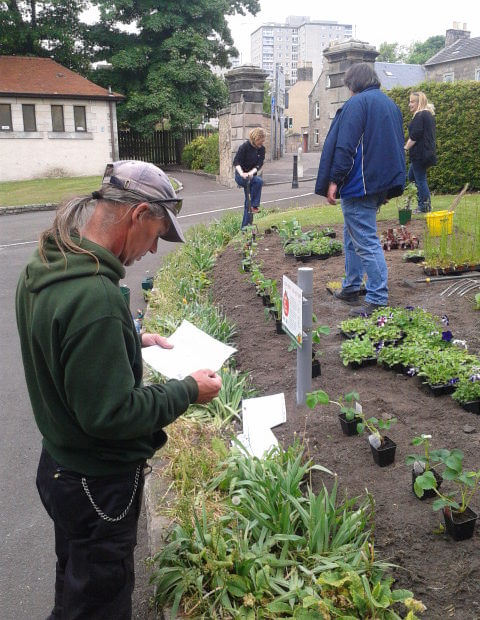 Earlier this year Greener Kirkcaldy were approached by Fife Council, to take part in their ‘Edible and Tasty Spaces’ (E.A.T.S) project and were more than happy to jump head first at the chance to promote another great project.  Greener Kirkcaldy were asked to plant and look after a productive growing space in Ravenscraig Park where fruit and vegetables will flourish and will be free to harvest when ready by anyone who fancies it.

A mix of fruit, veg and flowers were grown from seed by the volunteer team at Evergreen based in Barnett Crescent, Kirkcaldy, who did a great job delivering fine looking specimens. Kevin O’Kane of Fife Council arranged for the bed to be prepared and when we arrived on the day it was looking perfect and was ready to go!

Greener Kirkcaldy volunteers Geraldine, Jenny, David and Keith were there on the day and were keen to get started straight way since the weather was closing-in but spirits were still high. Greener Kirkcaldy’s volunteer coordinator Jackie Vural and development worker Russell Gill supported the group with cups of tea, biscuits and mucked in with the planting. In no time at all the bed was filling up and looking great. Just as well too; five minutes before the planting was completed the heavens opened and it began to bucket down. Not good for the volunteers but on a plus note this was a great way to water-in the plants with no effort!

To see a bed of mixed flowers, fruit and veg is quite an unusual sight in a public park setting and passers-by often stopped and showed a real interest and enthusiasm for such an enterprising project.

Many found it very refreshing to see the space being used for growing edible produce and good pollenating flowers to attract insects, particularly bees and hoverflies which may not be drawn towards conventional Public Park planting.

Bennochy Bridge, the Forth House and Templehall are also hosting EATS beds, offering a small but delicious example of local fruit and veg.

It is hoped that given the success of this project so far, growing fruit and veg in this way will be a common feature of the Kirkcaldy landscape. If you are a regular visitor to the town centre you may already be aware of other spaces being used in this innovative way.

If you see these spaces, stop and have a look. If anything catches your eye, pick it, eat it and enjoy it that little bit more, safe in the knowledge that it was produced in the town, by people who really care about the community and are passionate about making Kirkcaldy a more attractive and productive place to stay.

Who knows? In 2014 a space in your own street may be used for this project and you can get involved too.