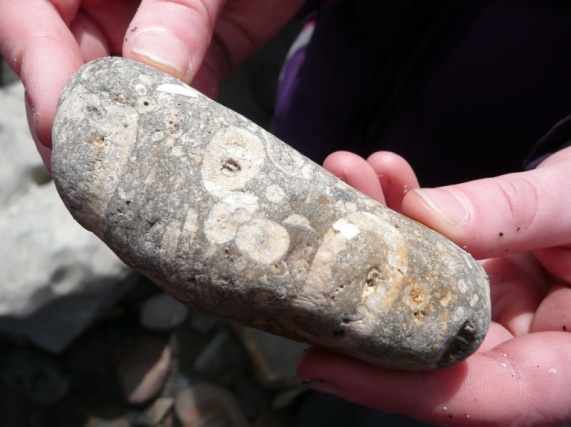 The group gathered at Seafield Beach Car Park on a breezy Saturday in April, it wasn’t too cold so it was great to walk along the coast to see the wonderful scenery, while learning about geology.  Leading the walk was Tony Wilson and there were a large number of people of all ages on the walk.

At first we wound our way along the beach looking at a variety of rock types and hearing about how they were made. We heard about how the strata were created and how the waves, tides and plants could leave deep marks in the rock.

We were told about the rubble that was used to prevent flooding and also as ballast on ships and so we now know why our beaches are often littered with concrete and bricks.

Sadly several sea birds were found dead; quite a few puffins and a kittiwake. These deaths are most likely due to the harsh cold spring we have had and it seems to have taken its toll on our bird populations.

On a happier note there were also many seals sunbathing on the rocks and it was fantastic to see them in great abundance.

It was an excellent day and it was such a great chance to learn something new outdoors!