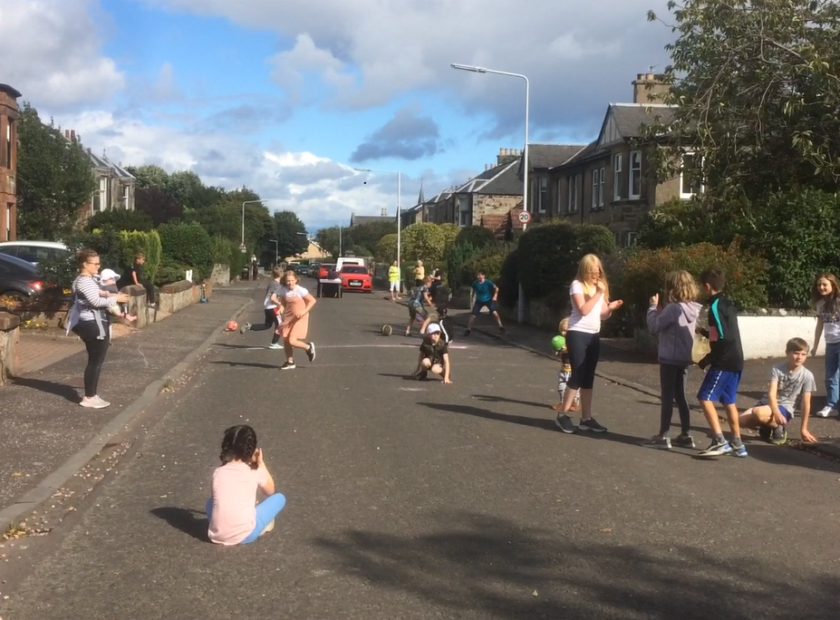 Earlier this year, we saw children playing on their street and neighbours enjoying a blether. In an event that was the first of its kind in Fife.

The Play Streets event saw a section of Milton Road in Kirkcaldy closed to through-traffic. This was to provide a safe environment for children to play on the road outside their front doors. About 50 residents of all ages came along. Older generations had a blether over a cup of tea while children had the run of the road.

The children showed their imagination by creating a feast of chalk artwork. This included a giant game of hopscotch that went all the way up to 103. They also had fun with ball games, scooters, bikes and skipping ropes. Parents took the opportunity to teach their kids games from their childhood, such as kerby.

The event was inspired by Playing Out, a national organisation that supports local groups and residents to organise Play Streets events across the country. It was organised by local residents on the street, with support from Greener Kirkcaldy.

Susan Jeynes, Active Travel Development Worker for the charity, explained how the event came about. “We ran a Kirkcaldy Car-Free Week earlier in the year, to help people imagine what the town could be like if there was a greater focus on people rather than on traffic. Playing Out gave a presentation at one of our events. They explained the idea of the Play Streets concept, where a residential street is temporarily closed to through-traffic to create a safe space for local residents to socialise. We were inspired by this idea, and reached out to see if any residents would like to do this on their street.”

Justin Taylor responded, and started chatting to his neighbours and building local support for the idea. He said, “It was lovely to see children playing in the streets again and just enjoying themselves, feeling safe and knowing there weren’t any cars around.

“The other side was just getting to know our neighbours.”

The joy was plain to see on both adults’ and children’s faces as the sun shone down on the event. Residents are already asking when they can do it again.

Greener Kirkcaldy would love to see Play Streets become more widespread. We hope that other groups and residents across Fife will be inspired to organise their own events on their streets.