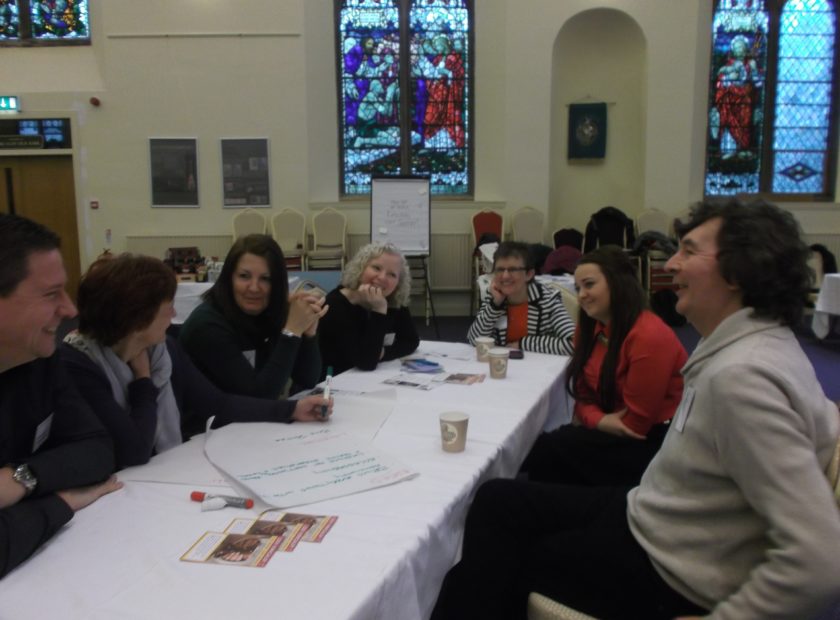 We held our first Annual Gathering on Saturday 25th January, at the Old Kirk in Kirkcaldy. Thank you to everyone who came along and helped make the day a great way for our members to meet up and help shape our plan for the next year. This post gives an overview of the Gathering. Please get in touch if you’d like any more information, or to get involved.

The Gathering started with two guest speakers. First, Cllr Judy Hamilton, Councillor for Kirkcaldy Central, introduced the day with a great speech about Kirkcaldy, the importance of volunteers and community organisations, and her experiences of Greener Kirkcaldy. Thank you Judy for your kind words! Next was Alan Caldwell, a volunteer director at Comrie Development Trust, and a consultant who supports community companies across the UK. Alan shared his inspiration of working with “communities doing it for themselves”, including the key role played by the members and volunteers of organisations such as Greener Kirkcaldy.

We then heard from some of the Greener Kirkcaldy volunteers and staff. Jackie Vural, who has been volunteer Chair for the last year, gave a great overview of the work that we’ve done in that time. Highlights include the popular Shine on Fife campaign which supported households interested in solar energy; a great series of courses and workshops to develop people’s skills and confidence in growing their own fruit and veg; the volunteer bloggers who’ve made our website so much more interesting; and our work with the students of five local schools.

Next, Project Manager Suzy Goodsir told us more about how Greener Kirkcaldy’s energy advice project helps householders heat their homes affordably while treading more lightly on our planet. Suzy’s big news was that the advice project is now operating Fife-wide, in partnership with Citizen’s Advice & Rights Fife and others. Then Development Worker Fraser Nicol and volunteer Gill Graham gave us an update on Ravenscraig Community Orchard. The fruit trees and soft fruit bushes are thriving, and the orchard volunteers have given an amazing 1000 hours so far – no surprise that they won an award for Best Volunteer Team last year. Lisa Farrell (Senior Development Worker) then shared plans for this year’s food and cookery courses, including a beginner’s bread-making workshop in February. And Development Worker Russell Gill told us about the new project Greener Kirkcaldy is working on at Dunnikier Park, to develop an Edible Landscape of fruit and herbs in a previously bare part of the park. Russell will be leading volunteers to plant almost 100 fruit trees at the Park in early February.

The last presentation was volunteer board member Andrew McDaniel telling us about plans for the future. Greener Kirkcaldy has recently developed a business plan for the next 5 years, with the aim of becoming more financially sustainable while continuing to make Kirkcaldy greener. The plans include developing community-scale solar energy projects; getting more involved in delivering training and skills for employability; and carrying out a feasibility study into the idea of a Community Food Hub. These new projects will form a key part of Greener Kirkcaldy’s work in 2014 – we’ll be consulting the community, carrying out studies, and writing business plans.

After a quick coffee break, we spent the rest of the morning discussing the proposals for a Community Food Hub. Inspired by all the community food growing projects and new allotments in Kirkcaldy – from the Kaleyard to Ravenscraig Walled Garden – the Food Hub idea is to create a place where folk can come together to grow, cook, eat and learn; with the aim of reconnecting people to where food comes from and increasing access to local food. It could include a community kitchen, chill store, workshops, space for social enterprises, education and training zone, and perhaps even a café. A possible location for the Hub is within Ravenscraig Walled Garden, an enclosed area within Ravenscraig Park where Kirkcaldy Community Gardens and Allotments have created a thriving community of allotments and a training area for schools and groups, and where our Community Orchard is located.

It was great to get feedback on our ideas, and it was overwhelmingly positive. People were particularly keen on the community aspect, of bringing people together to learn about healthy local food, and on offering skills and training. Suggestions included making connections with the Food Bank, and with local schools. We also identified some of the challenges that we must face while developing the project – finding a sustainable business model, getting the location right, and securing start-up funding.

The next steps for the Food Hub proposals will be to consult the wider Kirkcaldy community – over the next few months we’ll be carrying out surveys, as well as talking in more detail to potential project partners. Several volunteers offered to help take the project forward, which we greatly appreciate.

We ended the Gathering with a delicious Burns-style lunch of veggie haggis, neeps and tatties – it was Burn’s Day after all – and left the Kirk full of ideas and inspiration for 2014.

< Save the Environment with Savvy Shopping | Dunnikier Park Edible Landscape – First Trees Go in the Ground! >